Here's a chance to show off your zxr400, so get them digital cameras out and show us some piccies.Rebuilding your bike or modding it then let everyone in on it.

My new addition to the collection 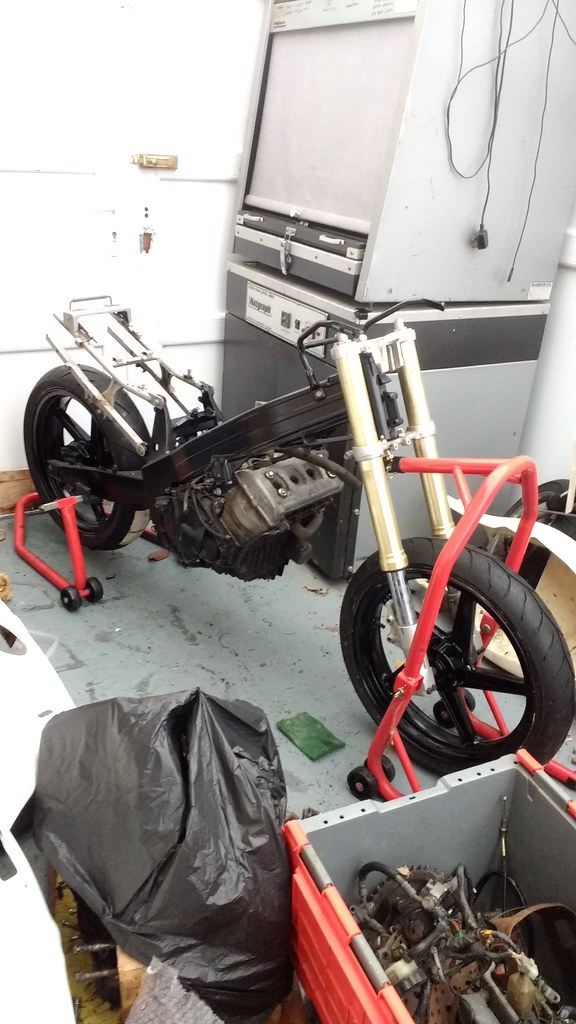 Gonna be a little ripper

It's on a "race" loom, has an ignition barrel with no key, and a missing fusebox. Have managed to strip out the main bit of the barrel, and bypass the starter lockouts.

The bike clicks the starter motor, but the battery was low volts...will see what a bit of juice will do for it...could still be that the starter solenoid is dead. 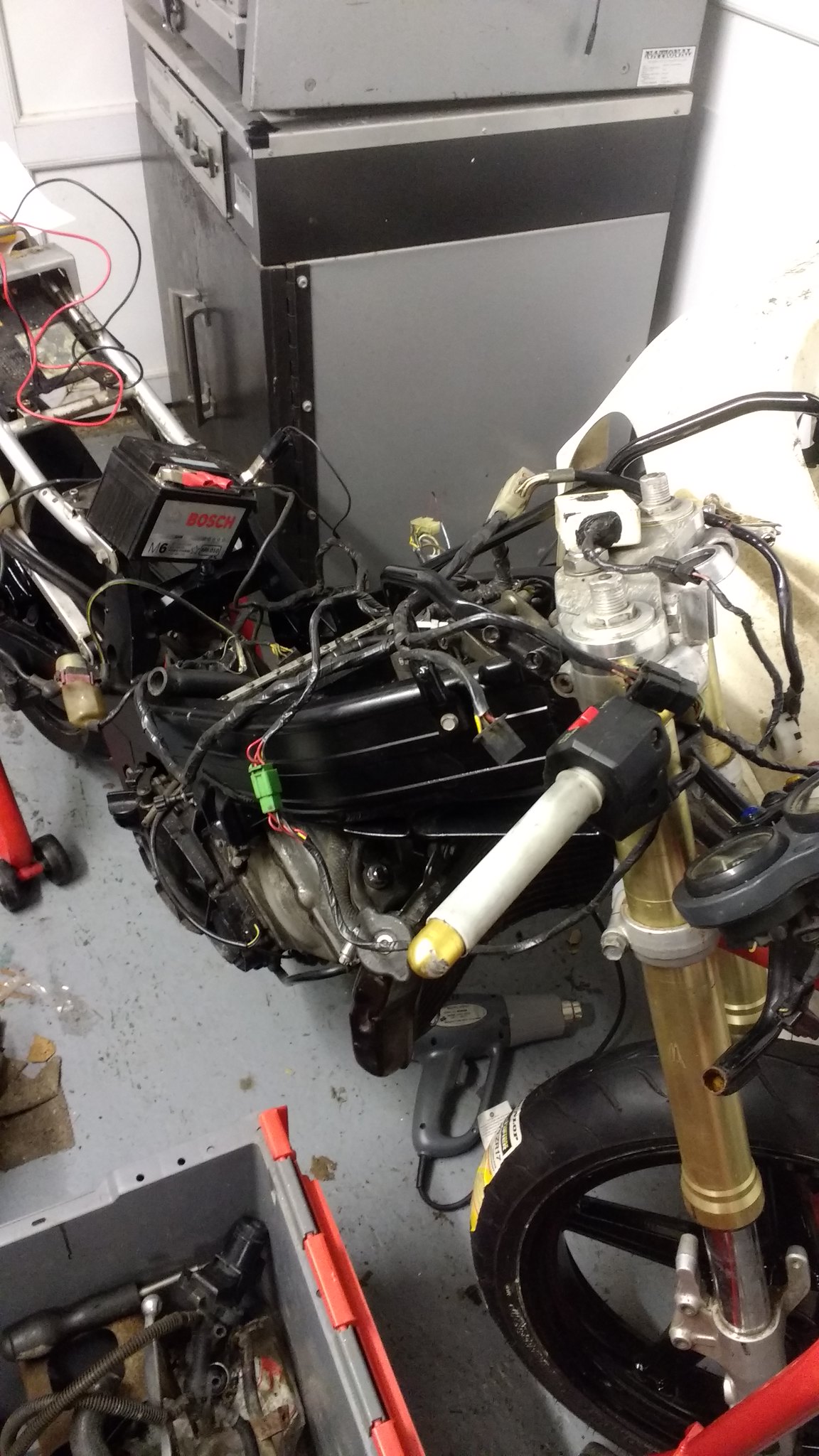 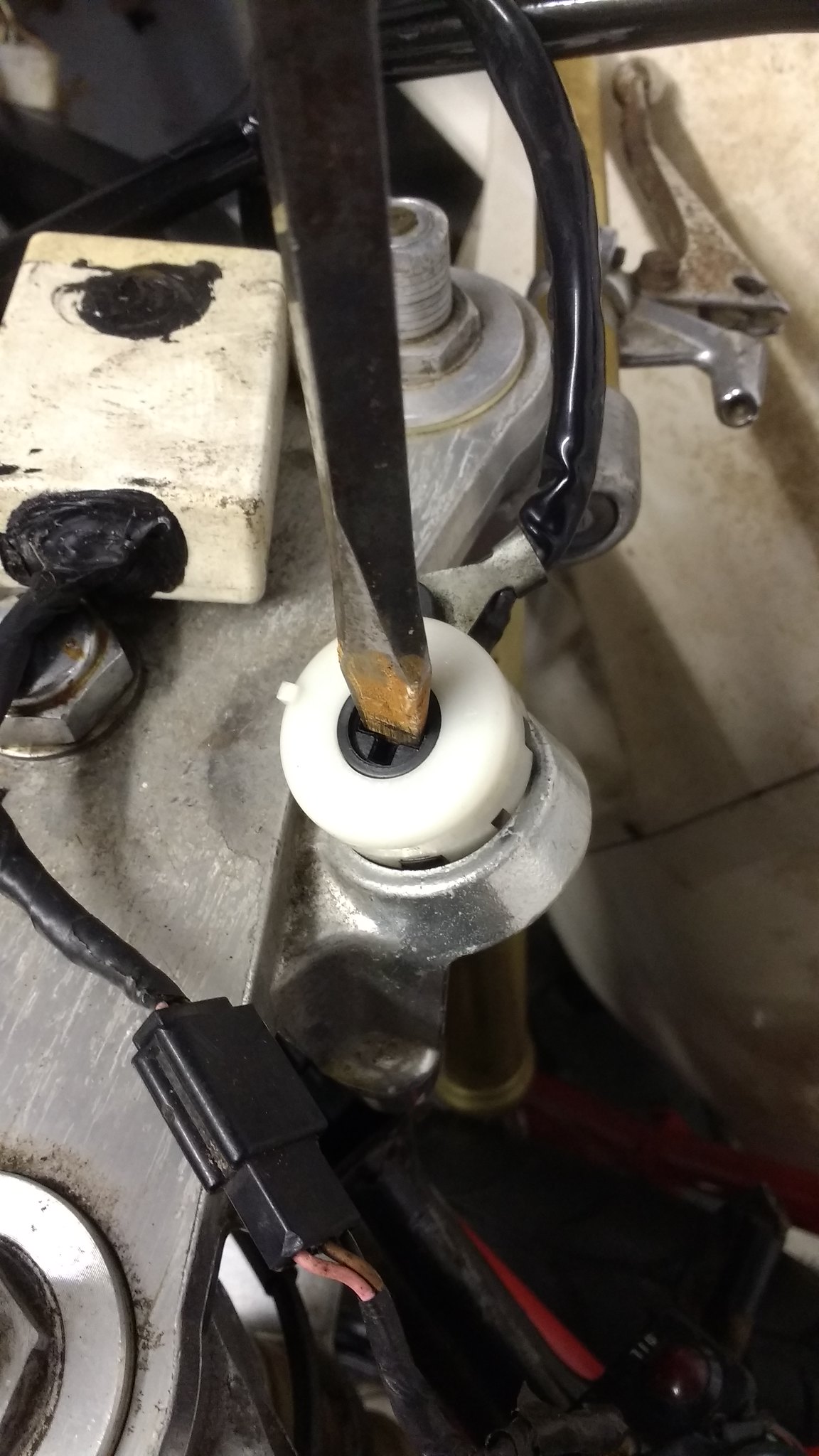 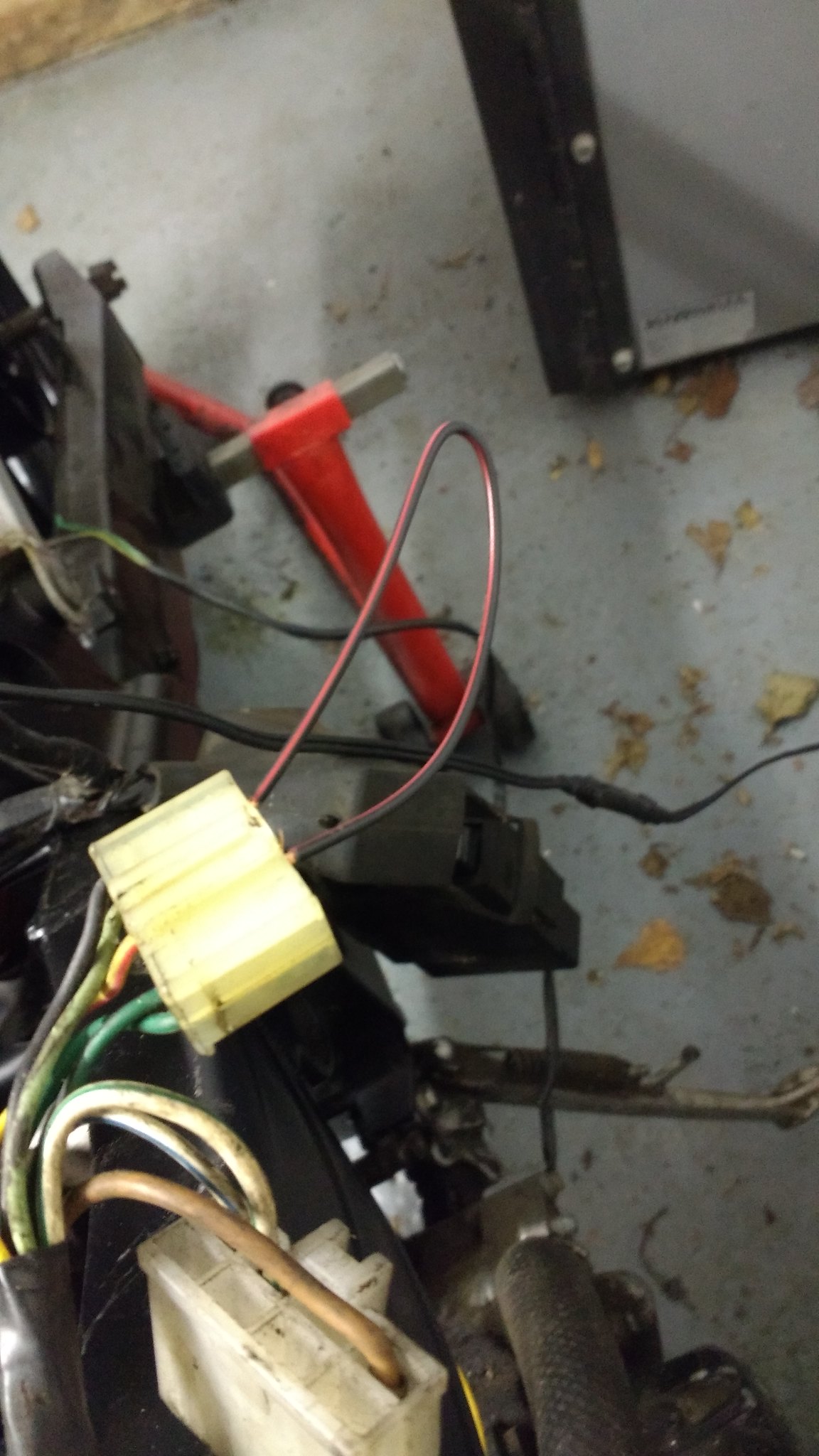 Ohhhhh very jealous...had one of these for my first bike, loved it right up till a parked it in to the front of a Vauxhall Cavalier!

Haha perhaps I should nip out and buy one then! What’s the plan for the 250, restoration project?
Top

corrr how you found one of these over here is beyond me! can't wait to see the finished project!
Top

Yeah, Uber-rare, the 6 year search is over...hopefully. need to jump through an odd hoop with the DVLA.

Basically the last owner declared it scrapped to avoid SORN each year and the prospect of a fine...I've just sent off all the information I have to the DVLA, hopefully they will see that it's not been modified, is on the original engine from 1990 and we are all good...fingers crossed.

It's still sat in the corner of the garage unfortunately. I'm currently translating the Japanese only service manual into English.

Work on the 250 can't proceed until the 400 is finished, and that staled as i needed to buy a new car after getting rear ended by an 18 wheeler...looking to buy the rear shock for the 400 soon...then it can all go back together after almost 2 years apart

Oh wow, hope no1 was hurt? Shame the bikes haven’t gotten done yet. I’ll be stripping the Mrs’ bike back down again shortly, as it’s decided it doesn’t wanna run at low revs...nothing an ultrasonic carb clean won’t sort im sure! Might actually get around to dragging my own SP out the corner of the garage at some stage and finally get it sorted too! Lol
Top

No injuries, and took the opportunity to upgrade to something impractical but fun...got's me a Celica TSport, 192bhp and lightweight, fun but she is a thirsty bitch

I'm getting about 28mpg driving conservatively and 20mpg when no one is watching.

Tom Seleck - the name given to my Colt...loved this car, this is what i got the 250 into the back of: 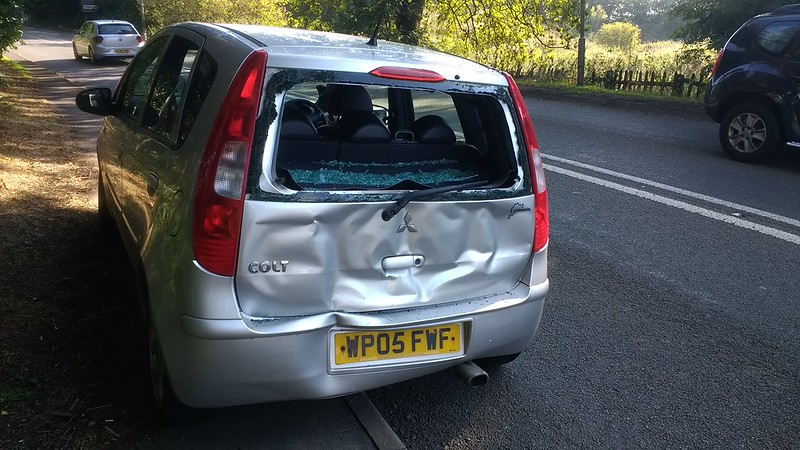 The lorry gave it a good nudge... 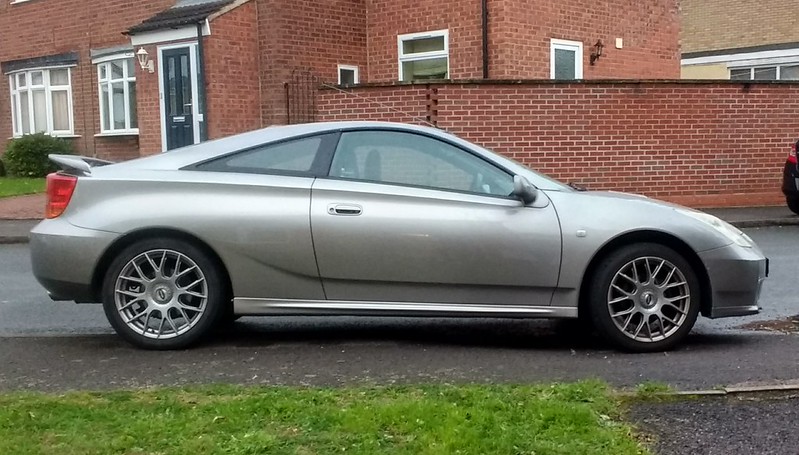 Wasnt sure if i put the video of the 250 eventually firing up, sounds bad, but it had the exhaust on very loose, no throttle cable so i just set a very high idle...just wanted to make sure it didnt sound like a bag of spanners...

Progress is being made. 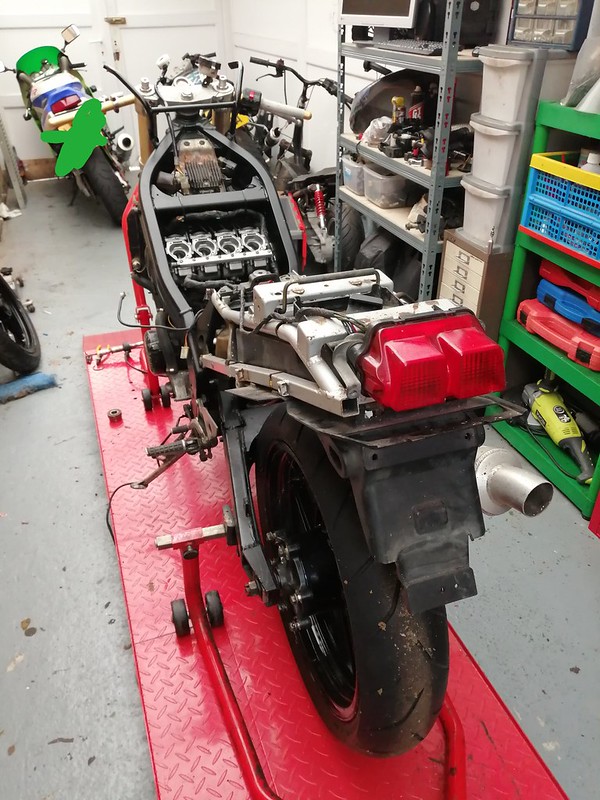 Most of the major bits have been sourced, needs an airbox and front clock stay then its only missing a few brackets and fairings.

Need to get some fuel going through the engine and make sure that it's fully happy, then keep on building it up, when it's all there minus the fairings I'll strip it all back, replace any unsalvageable bits and check it all for lightness...

I want my wife to pass her test and then use it and she wants it as light as possible, so gonna keep it stock but with full lightness in mind, so ally brackets instead of steel, mod the subframe to single seat with a central ally ar to hold the tail plastics, ally bolts for non structural, Ti for structural and the engine.

A mate of mine makes fiberglass parts, am eventually gonna throw some carbon fiber his way and see what he can make

glad you havent given up with it, will be good to see it finished, fully expect a video of it running and screaming when its complete!
Top
Post Reply
23 posts